By the time I turned 23 I was looking for a new challenge in my life. I ran an underprepared marathon three years before, and after that quit exercising for way too long. I don’t really know how it happend, but somehow I thought triathlon would be my kind of sport. And so I started browsing the internet and found something called “Ironman”. Yup, that’s what I was going to “do”. Running a marathon I knew, but riding a bike was something new, as was swimming freestyle. I didn’t know anything really, that’s the main reason why I thought I could do it, because I din’t know anything about how tough it would turn out to be.

I registered to participate in Ironman Kalmar, no way back from there. I bought a second hand bike, and started watching youtube videos about freestyle swimming. But after three weeks of struggling with all three disciplines, I decided to go to a good triclub in my province. I asked them if it is possible to finish an Ironman with only one year of preparation and for some reason coach Appermans was willing to show me the way.
After a month I competed my first Olympic distance triathlon, as hard as it was physically, mentally it was a whole different level of stress: In a year’s time I would have to be able to do four times this distance in one long day, it seemed impossible at that time.

There was only one way to go from there, executing every training in my weekly training plans, even if it ment riding my bike to the swimming pool, and back after a 6am swim, to leave for work at 9am. And I did so a year long.

Mid June 2014 I had a go at my first Ironman 70.3 in Luxembourg. The longer the distance got, the better my body responded. I baffled everyone in my triclub and myself by finishing third in a time of 5h01min. 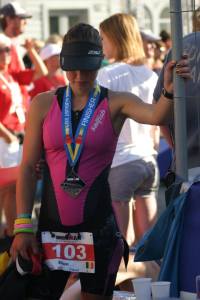 August 16th 2014, Kalmar, Sweden. My first ever Ironman experience, a year after I decided to enter this amazing world of triathlon. I still don’t know how I got my body to finish, but it did, and it did very well. 10h39min33sec and age group victory. I was over the moon. But doing this twice in less than two months time, was just too much to ask and so I passed on the Kona ticket. And so began my quest to qualify a second time, and to actually get to go to Kona, Hawaii.

That quest ended in Maastricht this August, after 2 more podium finishes in three years time, I finally took another victory in my age group and now I’m off to Kona to race the Ironman World Championchips on October 13th.